When my parents visited me in The Netherlands, my dad was hoping to find some kuchen, a German cake that his grandmother used to bake. He didn't have much luck, so for his birthday earlier this week, I found a recipe and made it in lieu of a birthday cake. And I don't know whether it tasted like his grandma's, but it tasted good enough that I've been asked to make it again for Easter (yes, we already ate the whole thing). 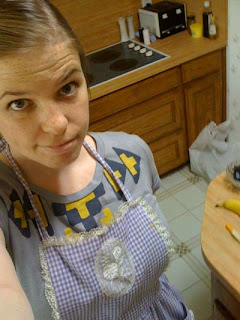 It's Cinnamon Swirl Kuchen, which is basically a coffee cake and those brown spots are cinnamon, not burns, I promise. The cinnamon and sugar I put in it remind me of the time I thought I had invented a soup. But it was really just sugar and cinnamon and room-temperature water. I wouldn't recommend it. 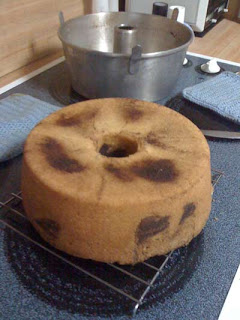 And even though this is a really crumby picture, I just wanted to show how it somehow magically swirled! I put it in as layers and it came out swirly! 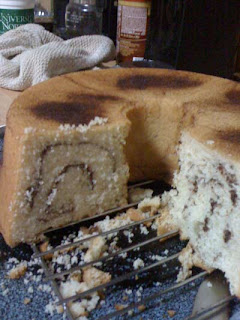 Here's the recipe, if anyone's interested. I'm trying it with a glaze this time.
Posted by Bethany Farnsworth at 7:07 PM

Email ThisBlogThis!Share to TwitterShare to FacebookShare to Pinterest
Labels: food