I got to The Hague yesterday and very quickly realized that I'm really in another country. Everything is different. This doesn't seem like much of a revelation, but I hadn't really anticipated how overwhelming this would be to me (especially after all my teary goodbyes and the 7+ hour plane ride). The driving, the elevators, the money, the plugs, the weather, the language. Sure, I knew most of this before I came, but somehow yesterday I was in no condition to deal with it. So I spent as much of the day as possible in bed watching MTV and Iron Chef UK with Dutch subtitles.

Today was much MUCH better. Does jet lag make you a crazy person? Because that's how I was yesterday. Luckily for me, I can pretty much sleep at any time of day, so getting on Dutch time should be no problem.

I've moved into my apartment (I'm sharing with one guy right now and soon we will probably have another roommate) and unpacked a bit.

I've taken the bus a few times and now have a bus pass with a lovely photo of me (The photo guy really wants to do more than passport photos, I think. "We'll take some nice pictures of you and you can hand them out, ja?").

I've gotten lost multiple times (Where are the dadgum street signs?!) and then been helped by friendly Dutch people (They are much nicer than they are on that Amsterdam go-see episode of America's Next Top Model).

And I've gone to McDonald's. Don't judge me. I just wanted to be able to pronounce the things on the menu. So I didn't get this: 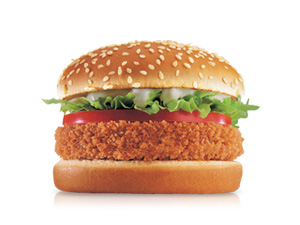 The Groenteburger. By translating McDonalds.nl, I've gathered that it's a vegetable burger with all kinds of vegetables in it. Not nearly as weird as it could've been. Maybe I'll try it next time. Or the Chicken Sensation!
Posted by Bethany Farnsworth at 12:25 PM

Email ThisBlogThis!Share to TwitterShare to FacebookShare to Pinterest
Labels: travel